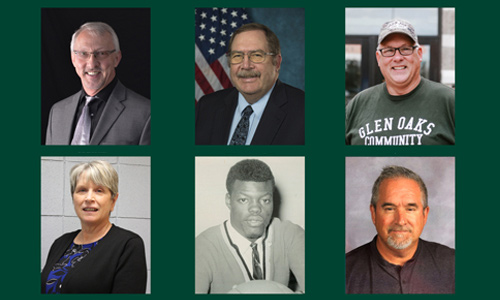 Glen Oaks Community College is pleased to announce the recipients of the 2020 Glen Oaks Special Recognition awards. These awards are typically announced during the spring commencement ceremony which was postponed as a result of the COVID-19 pandemic.

“We originally rescheduled graduation to December, but as a continued concern for the safety of our students, employees and the community, we have made the decision to include the 2020 graduates as part of the May, 2021 commencement ceremony,” said Dr. David Devier, Glen Oaks president.

However, at this time, the college wishes to announce several individuals who are being recognized this year. They are:

The E. J. Shaheen Chair for Teaching and Excellence Award was initiated in 1984 with a generous donation from E. J. Shaheen, one of the original Glen Oaks Board members. Shaheen, a college professor, lawyer and business owner, placed a high value on education and spent much of his later life promoting high quality education and education institutions, including Glen Oaks. This year’s recipient is Bill Lederman.

Bill Lederman, professor of nursing, has a strong passion for education. He is said to work hard to make sure that his students not only understand the content, but he instills in them the importance of thinking about and understanding their values. Lederman received his LPN training at Glen Oaks and went on to receive his associate degree in nursing from New Mexico State University, his bachelor’s in nursing from Indiana-Purdue University in Fort Wayne, Ind., a master’s in educational leadership from Western Michigan University and a master’s in nursing from Goshen College. He has taught at Glen Oaks since 1986 where he teaches Nursing Role Transitions, Leadership, Ethics, Obstetrics and Pediatrics classes, and Math for Nursing. Bill and his wife, Janell, who retired from the nursing faculty at the college, reside in Sturgis. When he’s not teaching, Lederman enjoys reading and you’ll often find him in the yard working on his landscaping projects.

This award recognizes employees of Glen Oaks for outstanding performance and contributions to the college. This year’s award goes to Larry Diekman.

Larry Diekman, director of buildings and grounds and public safety director, has been with the college since 2014 starting as a maintenance assistant and becoming director in 2017. Diekman is said to be easygoing, gets the job done, and when it comes to helping others—he has a heart of gold. He has a positive attitude and is respected by everyone. Diekman attended classes on campus in the late seventies and did training at the Michigan State Police Academy, Lansing Community College and Ingham County Sheriff Department Academy. He enjoys outdoor activities, and in particular hunting, fishing and sports.

This award recognizes alumni who have distinguished themselves through professional excellence and personal service. This year’s award goes to Loran Wingfield.

Loran “Larry” Wingfield, is a 1983 honors graduate of Glen Oaks with an Associate of Science degree. He began his post-secondary education with a music scholarship at Glen Oaks. He continued to follow his dreams and aspirations toward an aerospace career. He received his bachelor’s in engineering from Tri-State University (now Trine), and participated in an engineering co-op program at Wright Patterson Air Force Base in Dayton, Ohio, where upon graduation he landed his first full-time job. He later worked at Arnold Air Force Base in Tullahoma, Tenn., for seven years, before accepting a position at the Pentagon. He moved to the Washington D.C. area where he worked in the Missile Defense Agency for the Pentagon for nine years with multiple assignments in test work, deployment of US and allied missile defense capabilities and other classified work. He took a division relocation to Huntsville, Ala., in 2008, and retired from the MDA in 2019.

Part-Time Faculty Teaching Excellence Award – Marlene Livingston
This award recognizes employees of Glen Oaks for outstanding performance and contributions to the college. The award is presented annually to a part-time faculty member or adjunct who demonstrates excellence in teaching and who reflects the value of education to students. This year’s award goes to Marlene Livingston.

Marlene Livingston, allied health instructor, has taught at the college since 2004. She says the most exciting part about teaching is seeing the pride as her students learn new skills and progress to the point of being able to carry out hands-on training by themselves. She is said to always be flexible and willing to be able to do what is needed to make sure students are successful in their studies. Born and raised in Grand Rapids, Livingston studied practical nursing at Grand Rapids Junior College. She received her associate in nursing from Grace College in Winona Lake, Ind. She resides with her husband in Portage and together they enjoy the outdoors—biking, walking and nature.

The Athletic Hall of Fame Award recognizes members of the Glen Oaks community for outstanding achievement as an athlete, coach, team, administrator/staff, or contributor to sports. These individuals have brought distinction to themselves and the college through their achievement, commitment, sportsmanship and leadership in athletics. This year there are two recipients: C.B. Gordon, Jr., and Joel Mishler.

C.B. Gordon, Jr., is said to have stood out as a “marvel” on the basketball court, hence given the name “Genghis Khan” by fans and news reporters. He attended Glen Oaks from 1968-70 after graduation from Muskegon Heights Public Schools and was the first Viking in any sport to receive NJCAA All-American recognition. He turned down an offer to play basketball with the Dallas Chaparrals and instead went to play football in the Philadelphia Eagles National Football League. Gordon became a minister and led several ministries across the US. His talk “Big Man with a Big Message” was said to be soul-stirring. Gordon, who passed away in 2018, was active in many community organizations, but his passion is said to have been working with and mentoring inner-city youth.

Joel Mishler was the Viking baseball coach from 1992 to 2002. His winning teams advanced to regional competitions for nine consecutive years; however, it was in the spring of 2000 when the team won the regionals and the Vikings took third place nationally in National Junior College Athletic Association Division II. Mishler worked as an entrepreneur as he owned and operated a restaurant, bakery, and bed and breakfast business for 21 years. Today, he teaches business at Northwood High School in Nappanee, Ind., as part of Wa-Nee Community Schools. In addition, he is an associate scout for the Florida Marlins, and a partner in the Indiana Chargers Baseball Academy in Goshen, Indiana.