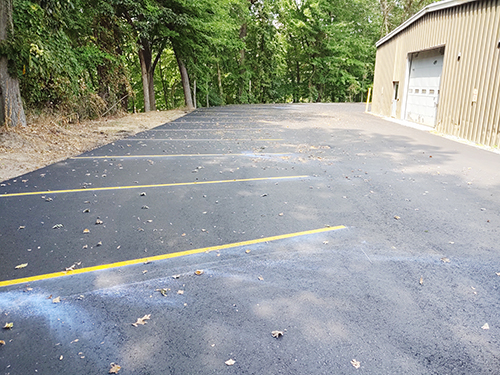 Students returning to Glen Oaks this semester are seeing some major improvements to the campus.

“With fewer people around over the summer due to COVID-19, it was a perfect time to complete several projects that had been on the backburner,” said Dr. David Devier, Glen Oaks president.

The main project was a totally rebuilt main parking lot, which was the original parking lot from when the campus opened in 1969.

“We received a $50,000 grant toward the parking lot project from the Motorcycle Safety program funding from the State of Michigan,” said Devier. “The program, which has been held at the Sturgis Middle School, will be moving to campus next summer.”

Originally the parking lot project was slated as part of the state’s capital outlay project and later it was learned that parking lots do not qualify for those funds.

The college also added a new parking lot by the north handicap entrance and rebuilt the south handicap entrance parking area.  These projects required the removal of several mounds and concrete bridges that had been used for emergency exits since the building opened in 1969.

“Erosion and maintenance were issues with the large dirt mounds” said Devier. “There were also ADA issues that needed to be addressed. The end result adds more faculty/staff parking spaces on the north side of campus including additional ADA parking. The fire escapes now have outside stairwells – and finally, yes, with the dirt mounds gone – the areas are more aesthetically pleasing.

“We used local contractors with the exception of an asphalt company out of Plainwell, MI,” said Devier. “They were able to reuse the asphalt grinds to sell for fill and residential driveways, and the excavator was able to resell the soil from the mounds.”

The college used part of a $1.5 million Michigan Economic Development Corporation grant, received in 2018, to fund such projects.